Sometimes I have weeks which are memorable on several counts.  Well, here’s a corker. I found myself making a film about Alzheimer’s with some extraordinary scientists, had a day of fishy surprises in Stirling’s Institute of Aquaculture, and finally found myself dancing with Darcey –  yes, her Strictly Dameship herself – on stage, in front of a couple of hundred people.

But let’s start with the fish.  The University of Stirling’s Institute of Aquaculture, which is the largest of its kind in the world, hold an annual Ph.D. conference which I found myself hosting on a wet day in April.  There were some very impressive presentations. Did you know that farmed fish, especially when they are hungry, behave like a load of grumpy toddlers? Apparently, they barge about, causing trouble, in particular, biting the fins of other fish which is painful if you are on the receiving end, as well as a big welfare and health issue.  But provide them – and this is a top fish fact – with the equivalent of fish toys (the proper term is environmental enrichment) and there is a significant reduction in fin damage. Who knew?

Another bit of fishy fascination concerned cleaner fish – the fish which feed on other fishes’ parasites. Aquaculturists talk about ‘deploying’ them as if they were a load of tanks in a battle.  Wrasse is a champion fish louse muncher but grow slowly. Thomas Cavrois, a French scientist, explained how manipulating temperature and food during their development can reduce the time taken to get them to their optimum ‘deployment’ size by a quarter.  He also let slip that whereas almost no-one in the UK will eat wrasse, an ugly thick skinned blighter with flesh that has a curious green tint, the French will kill for a wrasse fillet which they think is delicious. I was not surprised. I once met a Frenchman on a beach in Brittany enthusiastically eating a chiton, a rock dwelling mollusk that looks a bit like a scaly squashed woodlouse. Briny tasting toenail is being over generous.

Finally, African catfish.  They are the principal farmed fish in Africa and Isa Suleiman, a Nigerian with a wonderful knack for storytelling, had the entire audience hooked as he explained current hatchery practices in Nigeria.  ‘Shooters’ are preferred as broodstock. These are much bigger than the other fish and local farmers believe them to be genetically superior and pay premium prices for them. Sadly, Isa concluded, having checked out their genetic profile, that they had got big by eating their friends instead of tedious old fish food.  He’s now working to provide better broodstock to make this important industry sustainable. It was a top day and thank you to Giuseppe Paladini, a Scottish Crucibliste, for inviting me.

Goldfish are notorious for having short memories – although this is in fact, a myth.  Memory problems in humans, however, are often the first symptom of something we all fear – Alzheimer’s – and over 10 million people already live with this disease across Europe.  Although there is some evidence that the incidence of Alzheimer’s is falling, its prevalence will increase in line with the increasing number of us who now reach advanced ages. We all want a cure but the understanding of the brain is way behind that of say, cancer. 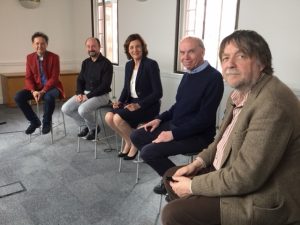 This year’s Lundbeck Brain Prize has been awarded to four scientists who have each contributed enormously to the understanding of the basic science underlying Alzheimer’s.  It’s a disease of plaques and tangles in the brain. I was privileged to interview the winners for a film. John Hardy, the geneticist, who advanced the idea that the build-up of amyloid plaques was a key process, Michel Goedart whose work focuses on the tau tangles found inside brain cells, Christian Haas who managed to devise a model for testing theories and Bart de Strooper, who heads the UK Dementia Research Institute at UCL and whose work on the enzymes that chop up amyloid has been so important.  Back in the 80s, only a few hundred scientists were interested in Alzheimer’s, including these four. Now it is tens of thousands. I’m looking forward to interviewing them all again in Copenhagen in May. And if you are wondering why, with so much work, we still haven’t got a way to prevent or treat this terrible disease effectively, I suspect we have a number – but we just need to give them far earlier in the disease process which may begin 20 years before any symptoms appear. 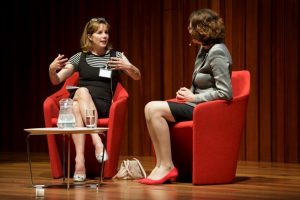 Finally dancing with Darcey.  I am including the least incriminating of the pictures, ie the one where I look slightly less like a twitching sack of potatoes.  The Dame of Dance and Strictly Belle had come to the Aesop Showcase and Conference at the Guildhall School’s magnificent Milton Court venue.  Aesop, which develops evidence-based arts interventions for health, was founded by my husband Tim Joss. It was an inspiring occasion and I love hosting it although obviously, I had to sleep with my husband to get the gig.  You can read more about it here.  Darcey has developed a dance programme called DDMix for schools and showcased it at the event.  She talked about it with huge passion and then decided to demonstrate some of the moves. Unfortunately, I happened to be the only person with her on the stage at the time and got roped in.  Dear reader, I failed for how anyone can look elegant beside the ever elegant Darcey. I did confess to her that I had been thrown out of my ballet class at the age of 4 for being a danger to the rest of the class (an unfortunate incident with a chair) and offered to show her a few of my steps but luckily for the audience, she declined the femtosecond experience which would have ensued.  Roll on the next season of Strictly.