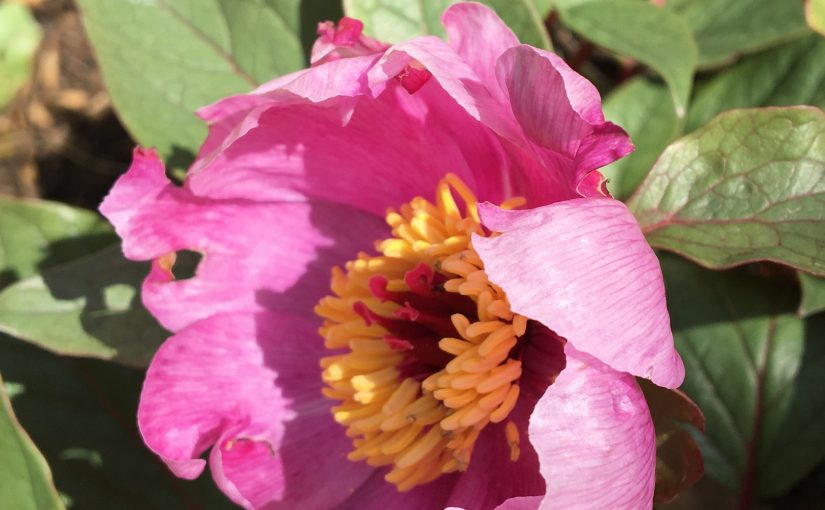 Peonies.  Oh, how I love them.

Let me talk you through some of my favourites….the first to appear is a little species peony called Paeonia Corsica.  It’s little with grey-green leaves and 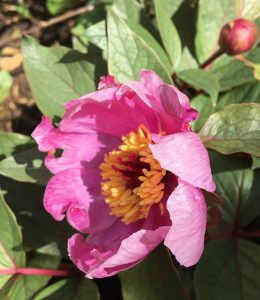 reddish stems but the flower is astonishing on such an insignificant plant.  It is a big blousy cerise pink with a shock of yellow anthers and purple stamens, and it is native to, well, the name is on the tin, Corsica, and Sardinia.

Another favourite of these species peonies (this just means the wild type – as in, they are native wild plants somewhere – is Paeonia cambessedesii, which has a slightly less knock out flower but is taller with a more pronounced red to the stems and leaves that look vaguely metallic.  This comes from another rocky place, Majorca.  They thrive in my stony Cotswold garden, despite being half frozen to death in the winter. 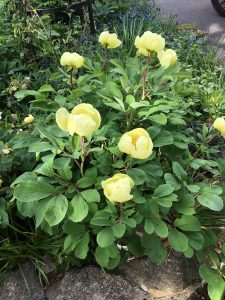 But for an instant love affair, clock Molly the Witch.  Her proper name is Paeonia Mloskevitchii but given no-one can say it, let alone spell it, she gets a nickname.  I have several big clumps, one had 37 flowers on it this year.  The flowers are lemon yellow, papery and simply gorgeous.  Teeny things, years from flowering, sell in some garden centres for £20.  In my garden, they seed all about the place and I have to pull them up.  Another thing I love about them is that they are harbingers of Spring.  When the weather is just warming up, their big fat purplish shoots muscle up from bare earth and slowly unfurl.

Finally, here’s an example of what is called intersectional peonies – these are crossed between tree peonies (woody eight footers usually with yellow flowers) and herbaceous peonies (the pink or red ones that appear in June).  Think of Lady Gaga at the Met Ball in her pink number and this is the peony equivalent. 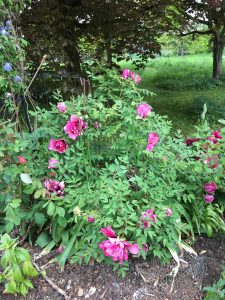 Again, they are really expensive to buy unless you get tiny ones (which I did) and are patient.  My history with this type of peonies is not happy.  I had one in a pot, grown from a twig, which was finally sporting a big fat bud.  To my horror, I saw my youngest son, then about 4 years old, who had not only found a pair of garden shears but was demonstrating his ability to cut things with them.  He chopped the peony off at the base before I could sprint from the kitchen and rugby tackle him.  He then bought me the bud in triumph at his accomplishment.  Reader, the whole peony plant died so seeing this one so floriferous fills me with joy.

I am in mourning.  My greenhouse has just been knocked down and I am finally exchanging its holes and leaks and wonkiness for a brand new model.  It meant I had to empty it.  I even shocked myself at how much was in it.  My kitchen is now crammed as frosts haven’t quite gone away and I am not a popular girl.