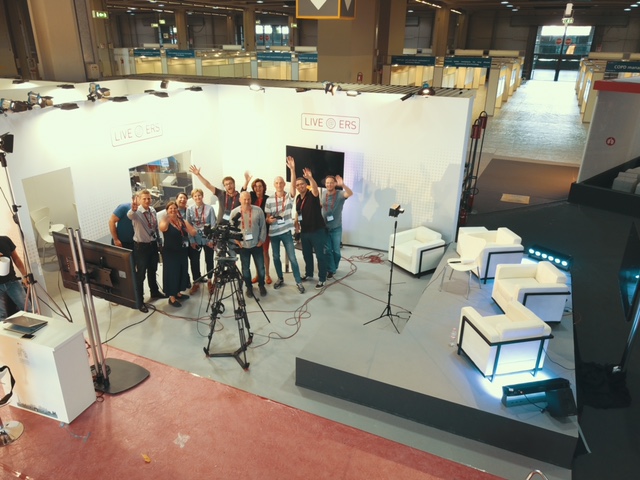 Milan was the first stop in a manic month of travel.  I was hosting Live@ERS, a daily TV feed at the European Respiratory Society international congress.

This is a huge meeting attended by some 22,000 respiratory professionals. The thing I love about attending big medical congresses is the vibe you pick up about what’s hot in the science.  It’s partly seeing the queues outside particular sessions but it’s also hearing the chatter over the coffee.  The lung microbiome was definitely hot.  Not that long ago, medical students were taught that the inner reaches of the lung were sterile.  We now know that they team with bacteria, which strongly influence the onset of disease.  For instance, studies of the microbiome in children with and without lower respiratory infection show that infection is the outcome of an ongoing turf war in the lung.  Resident non-harmful bacteria normally keep potentially harmful bugs in check, but some children either don’t have those peacekeepers or their efforts are overwhelmed.  There was a host of other presentations showing the role of the microbiome in COPD (chronic progressive lung diseases), cystic fibrosis, asthma and many others.  All of these illustrated the complex interplay between your environment, your bugs and you.  What does this work mean?  I think in the future you will see less emphasis on antibiotics and more on manipulating the lung environment to favour ‘good’ bacteria.  I think you will see testing of the microbiome in the initial workup as the microbiome of the lung may be a way of phenotyping (essentially a way to sort people with the same symptoms into different treatment baskets) which in itself may mean more effective treatment. Before you ask, live ‘good’ bugs pumped into your lung?  Unlikely I think.

The other thing that was hot was a big study from China on early-stage COPD.  If you’re a smoker, listen up. Normally, treatment is offered to those with symptoms, which means that their disease is already well on the march.  Those in the earliest stages, when lung function is about 80% of what it should be, typically don’t think there is anything wrong with them beyond a bit of a cough – “which is normal right if you smoke?” Yet their lung function is already declining.  There is no screening for early-stage COPD because there’s no evidence that treating it at this stage makes any difference.  Now we have the first indications that this might not be the case. Giving a broncho dilating drug called tiotropium reduced the expected annual decline in lung function in the treatment group compared to placebo. It’s a highly significant finding in China which is facing a vast problem caused not just by smoking but also by pollution and biomass burning.  It’s a study that potentially also opens the way to mass screening, say a lung function test for everyone, starting with smokers.  Some might say why not just ban smoking – well, both and of course –  but don’t forget that there are a significant number of people who get COPD despite being never smokers.

Finally, an observation from me about the newly published Mirror study, which compared patient’s and doctor’s views of their relationship Patients admitted fibbing, being far less than honest than even their docs had imagined.  Doctors also vastly underestimated the impact of severe lung disease on their patient’s daily lives and were much more concerned by their lung measurements than with what patients could or couldn’t do.  It’s a bit like us and the US, isn’t it.  Divided by a common language.  My advice to patients is to tell your doctors what’s important to you. And my advice to doctors is to ask ..and take what you’re told with a pinch of salt or three.